Accoutrements For a Geisha 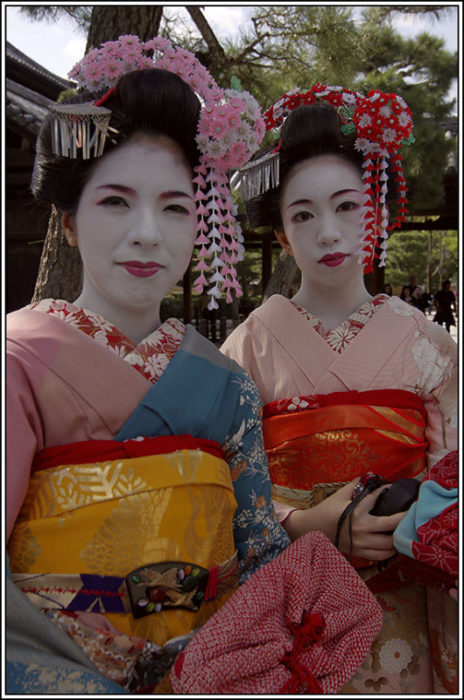 Accoutrements For a Geisha

Geishas are seen as symbols of culture and grace, full of puzzling mystery. They are entertainers who can be employed as hostesses for parties and formal as well as informal events.

Geishas of today are still expected to master traditional songs and poetry as well as the art of calligraphy. They perform a range of duties include dancing, classical music and a number of games. Many Geishas still attend the Hanayagi school to master the art of Buto, a traditional Japanese dance. They reside in traditional Geisha houses known as Okiya, and today still practice on traditional instruments such as the drums, shakuhachi and shamisen.

The original age for initiation as a Geisha was from around the age of 4.  Today training begins during their teenage years.

Geisha’s spend on average 2 hours to get ready and in some cases even longer.  A trainee Geisha known as a “Maiko” can take longer until she becomes proficient in the art of transforming into a Geisha.  A mobile phone is not part of the accessories of an apprentice Geisha.  They keep up to date with current affairs including economy and politics by digesting the daily newspapers.

Maiko are apprentices in training to become geiko. The word maiko translates as dancing child. They are generally less than 21 years old and become a geiko at 21.

The geiko wears wigs whereas the maiko have their hair styled naturally with more ornaments. Their make up is also different, the maiko wears more pink blush.  An easy way to identify them by their lips.  Junior maiko only paint the bottom lip red.  Senior maiko paint a thin line on both lips and a geiko paints all of their lips. Also maiko usually have red and white collars with a decorative pattern and geiko have a plain white collar.

All Geisha’s belong to a house where a mother known as an Okasan overlooks everything they do, educates them and prepares them for their career as Geishas.

Some of the tools used in daily preparation include items such as:

Hair ornaments known as Kanzashi which includes combs referred to as Kushi and hair pins called Kogai.  You can find some beautiful examples of Kanzashi on our site Kanzashi

Thank you for looking at Kasasagi Fine Arts.