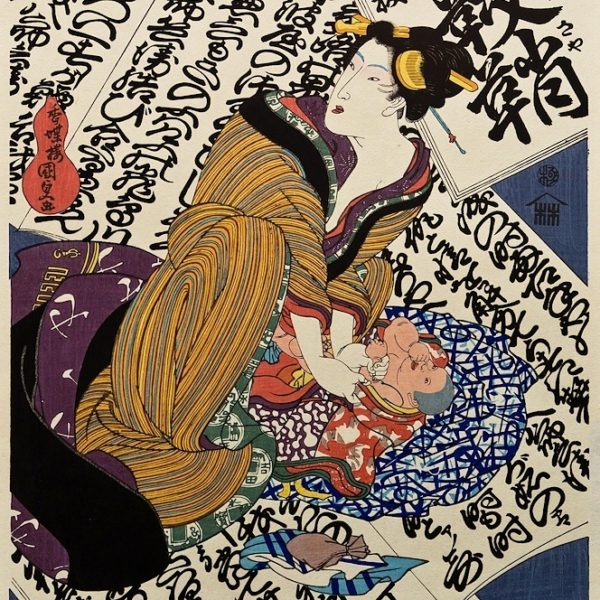 Oban Woodblock 1859 Print by Kunisada of a woman and baby surrounded by calligraphy.  A delightful, colourful and detailed depiction of a mother and child.

Kunisada Woman And Baby Woodblock Print with calligraphy.  Utagawa Kunisada III 1786–1865   – An Oban Woodblock 1859 Print by Kunisada of a woman and baby surrounded by calligraphy.  A delightful, colourful and detailed depiction of a mother and child.

Utagawa Kunisada (Japanese: 歌川 国貞; also known as Utagawa Toyokuni III (三代歌川豊国); 1786 – 12 January 1865) was the most popular, prolific and financially successful designer of ukiyo-e woodblock prints in 19th-century Japan.  In his own time, his reputation far exceeded that of his contemporaries, Hokusai, Hiroshige and Kuniyoshi.

Although not much is known of the details of Kunisada’s life, there are some well-established records of particular events.  He was born in 1786 in Honjo, an eastern district of Edo.  His given name was Sumida Shōgorō IX (角田庄五朗), and he was also called Sumida Shōzō (角田庄蔵).  A small licensed and hereditary ferry-boat service belonged to his family, and the income derived from this business provided a certain basic financial security.  His father who was an amateur poet of some renown, died in the year after his birth.  While growing up he developed an early talent for painting and drawing.  His early sketches at that time impressed Toyokuni, the great master of the Utagawa school and prominent designer of kabuki and actor-portrait prints.  In the year 1800 or shortly thereafter Kunisada was accepted by Toyokuni I as an apprentice in his workshop.  In keeping with a tradition of Japanese master-apprentice relations.  He was then given the official artist name of “KUNI-sada”, the first character of which was derived from the second part of the name “Toyo-KUNI”.

His first known print dates to the year 1807, however this seems to have been an exceptional design.  Further full-sized prints appear starting only in 1809 – 1810.  As of 1808 he had already begun work as an illustrator of ehon (woodblock print illustrated books) and his popularity rapidly increased.  In 1809 he was referred to in contemporary sources as the “star attraction” of the Utagawa school.  Soon after he was considered as at least equal to his teacher Toyokuni in the area of book illustration.  Kunisada’s first actor portraits appeared in either 1808 or 1809.  It is known that his first bijinga series and a series of pentaptychs of urban scenes of Edo, appear simultaneously in 1809.  By 1813 he had risen as a “star” in the constellation of Edo’s artistic world.  A contemporary list of the most important ukiyo-e artists places him in second place behind Toyokuni I.  Kunisada remained one of the “trendsetters” of the Japanese woodblock print until his death in early 1865. 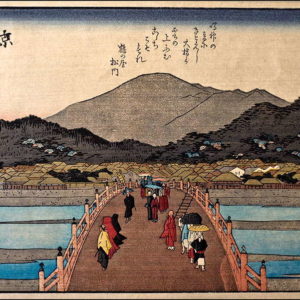